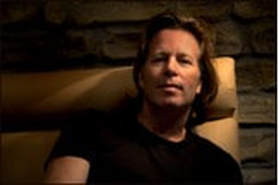 ​Stephen Nemeth founded Rhino Films in 1998 and continues to lead the successful, independent film company that originated as a division of the iconoclastic record label, Rhino Records. Prior to that, he worked as an independent producer and as a motion picture agent at the William Morris Agency.

As producer or executive producer, Nemeth’s feature film credits include The Sessions (Sundance 2012 Audience Award, 2013 Academy Award nomination for Helen Hunt); C.O.G., the first film based on a work by David Sedaris (Sundance 2013); Fear and Loathing in Las Vegas; Why do Fools Fall in Love; What We Do Is Secret; Snake and Mongoose; and Radio Free Albemuth, the last Philip K. Dick novel.

He is currently in post-production on the Bill “Spaceman” Lee biopic Spaceman and in pre-production on the adaptation of the New York Times bestselling book Confessions of an Economic Hit Man and Hunter S. Thompson’s The Curse of Lono.

Nemeth’s documentary credits include Dogtown and Z-Boys (Sundance 2001 Audience Award);  War Dance (2008 Academy Award nomination); Fuel (Sundance 2008 Audience Award); Pump; Flow: For the Love of Water, the follow up to Fuel (Sundance 2008); Climate Refugees (Sundance 2010); Robert Williams Mr. Bitchin’;  Patriocracy; Ride With Larry; Under the Boardwalk: The Monopoly Story; Beisbol; and Pick Up the Mic. Upcoming films include The Three Hikers; Education, Inc.; Crutch; The Peacemaker; Love Is; And Then the Climate Changed; and Atticus and the Architect.

A dedicated philanthropist and activist, Nemeth serves on the boards of Children Uniting Nations, Friends of the Earth, International Documentary Association, One Second Film Foundation, Shine on Sierra Leone, Wheels for Humanity and Wildlife Ecostation. He is is also an advisory board member of Children Mending Hearts, Full Frame Documentary Festival, OneVoice and Woodstock Film Festival. Additionally, Nemeth is a member of the Dean’s Board of University of California, Santa Cruz’s School for the Arts. While on the board of Artists for Amnesty, Nemeth developed numerous human rights-related features and documentaries. He also serves as a consultant for Admetech, a Harvard Medical School foundation developing prostate imaging technology.

Nemeth is a member of the Academy of Motion Picture Arts and Sciences and the recipient of the 2013 Global Action Award, 2009 Vision Award for Documentary Producer and 2009 Artivist Award for his advocacy and production of socially conscious films.

He is a graduate of University of California, Los Angeles (UCLA) and holds dual U.S. and British citizenship.